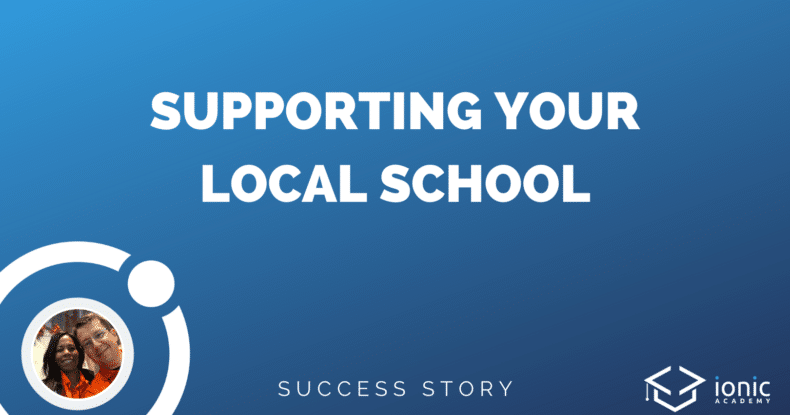 If you have kids, you might be involved in their kindergarten or school activities and have thought about improving a thing or two in the past.

But what if you could actually build the improvement yourself?

That’s what Chuck did, a self-employed software developer who wanted to facilitate the high school athletic department appointments for him and other parents.

Chuck picked up native Android development but noticed, with a background in Java, that getting started with Swift was a whole new world on top.

Eventually, Chuck settled on Ionic which gave him the confidence to move forward and realise his plans for the Crusaders app.

Here’s how Chuck puts it.

What is your current job position or role?
Self-employed guy who currently works as a contractor in the software development world, for a very, very large retail company.

Why did you chose Ionic?
I saw there were so many development tools out there to learn, Android Studio, – figured this was an ok start, as I have a Java background, then the Swift world popped up and that was a whole new barrel of monkeys to try and learn, then it got overwhelming due to the research and seeing the options. Javascript, Python, Ruby, Spring, etc – then I stumbled upon Ionic and the rest is history.

How did you initially learn Ionic?
I started doing some googling and found some online freebies, such as Jorge’s stuff over at javebratt.com. I believe I even purchased a few of his “books”.

Why did you join the Ionic Academy?
I saw the resources available after doing some of your tutorials online and wanted to go deeper. The content you provide is great, and easy to follow.

Which feature of the Ionic Academy do you like especially?
I enjoy your teaching/commentary style. (and your humor :))

What apps did you build with Ionic?
I’ve built an app for my son’s high school athletic department. It allows parents of athletes, or anyone really, to view current and future schedules for upcoming games, for all our sports teams (about 30) and allows them to easily navigate to that game location.

What were the biggest challenges with that app?
Probably building it for the app stores and getting it submitted, and all those hurdles.

How did the Ionic Academy help you?
Proper guidance, and examples. It was great.

Do you plan to develop more apps in the future?
Hopefully. The biggest hurdle for me is finding the idea of what app to build. But I’m anxious to get my hands back in there to be honest. Maybe even looking at that Ionic Studio thing. But I definitely want to get back in the game.

Chuck took the initiative because he had an idea and the right tools with Ionic to create and roll out a local app from which all families at his sons school benefit!

If you want to release your own local community app ideas and quickly learn Ionic, you can become a member of the Ionic Academy today and help to make your neighbourhood a better place soon!