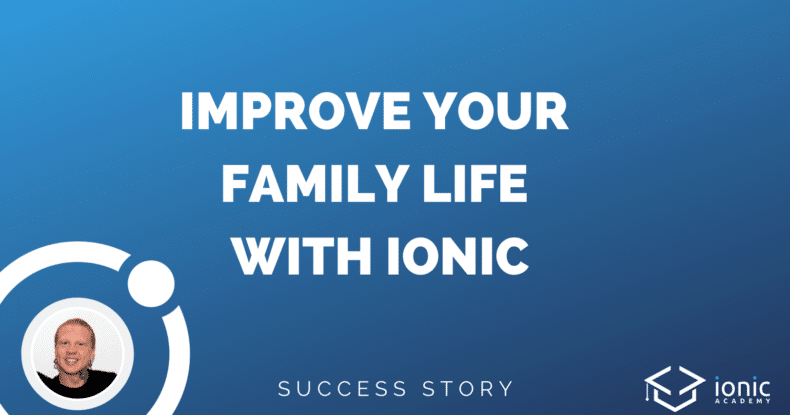 Work and family life are sometimes hard to manage if you work long hours – but what if each of them can benefit from the other?

Simon Brannstrom fell in immediately in love with Ionic and Angular after starting a new job. And because he saw the potential of Ionic, his awesome wife convinced him to build out a little side project he had started for managing the family life into a real app.

While not yet published, we all wait for the app and wish Simon all the best for the launch.

On top of that Simon is the lead developer at his company now, using both Ionic and NestJS for their secure video solutions.

I’m 34 years old, with a passion for development, constantly thinking of new projects and apps to develop.
I live with my girlfriend Michaela, our baby daughter who’s three months old, Ebba and our 6-year old daughter, Ronja.
When I’m not writing code, I’m reading about development and trying to learn as much as possible, constantly trying to improve myself.

I’m the Lead Developer for Compodium International AB. We develop secure and authenticated video solutions for (mainly) the healthcare sector.
Our latest video platform (which is soon to be released) is built with Ionic Framework for the frontend and NestJS for the backend, a very exciting project to work on!

How did you get into mobile apps / why did you choose Ionic?

A few years ago I was studying development at uni, and a friend who was the head of development at a company contacted me and offered me a job working with Ionic Framework (Version 3 at that time).
I had at that point never used Ionic or Angular for that matter either, so I was really thrown into the deep-end of the pool.

But I instantly fell in love with Ionic Framework and the Angular integration, the look and feel of it was a perfect fit for me personally.

I started by studying the code of my co-worked and friend who had been working on an Ionic PWA for a while for the company we worked for.
I then started trying to use bits of his code here and there, and with the help of Devdactic/Stack Overflow/Google/Documentation, I eventually started writing code that would transpile without any errors haha.

Since I was already reading Devdactic on a daily basis, joining the Ionic Academy was the obvious next step for me. I proposed this to the CEO of my company and convinced him to purchase a year worth of subscription directly seeing that the company would benefit of this.

I love the quick wins and the community. The Quick Wins are written in a way that it doesn’t matter if you’re new to Ionic or have been at it for a while, there’s always something new for you to learn. The community is a great place to get assistance for specific issues that might occur, and it’s a great way of giving back knowledge to others who might be struggling with certain aspects of Ionic.

I’m currently working on a personal project, FamLife.
It’s an Ionic Framework mobile app that is focusing on a family’s daily tasks. You start by creating the family in the app with all your family members, then you can, for example, chat with them through a group chat, assign tasks and shopping lists to family members etc. The project originated to assist my own family in it’s daily struggles with communication and has been of great assistance, so my girlfriend Michaela convinced me to develop it further beyond just my family and release it publicly which I will (hopefully before the end of this year).

The biggest challenge for me with my personal app was that I had a clear set of functions in my mind, translating those into actual code was difficult due to my inexperience as a developer. But having set my mind to it, and being super stubborn, I spent hours and hours trying to get it to work, I usually managed to succeed.

The community has been great, I’ve asked several questions on the Ionic Academy and Simon has personally answered many of those which always helped me getting things to work. Also, the quick wins always have something new for me to learn.

Definitely. I’m going to keep using Ionic Framework as long as I possibly can. FamLife is just the first app that I’m planning to release personally. I’m always full of ideas and trying to think of “the next big thing”.

Building apps with Ionic and NestJS as the backend doesn’t only feel right, it’s also mostly fun (while you don’t encounter nasty bugs). Although this tech stack is still young, it might have a promising future ahead with both frameworks bringing out constant improvements.

With this tech stack and the enthusiasm to find solutions, we will hopefully see more great Ionic apps from Simon in the future!

To get started quickly, you can check out the Ionic Crash Course of the Ionic Academy.