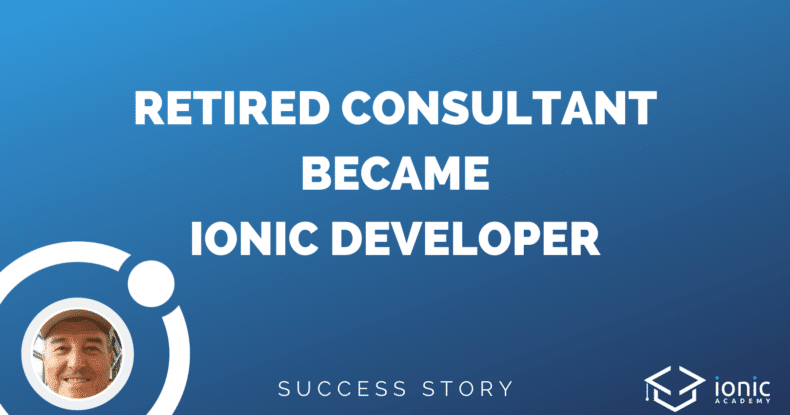 It’s never too late to learn something new.

Many developers with a long career in technology still have the urge to learn something new, even when they are already retired.

That’s exactly what Fritz Frei did, after a long career as a management consultant.

Fritz ventured into learning web technologies, and soon he discovered the potential of these new frameworks and languages that grew rapidly over the last years.

As a now self employed developer, Fritz was able to quickly build mobile apps by picking up Ionic as the framework of choice. He worked for clients and delivered their apps for both iOS and Android, after they were let down by the promises of other developers that couldn’t deliver the apps they promised.

Let’s hear what Fritz can tell us!

Who are you?
I’m a retired Management Consultant who started creating and maintaining Web Apps with ASP.NET, C# and MS SQL Server in 2006. 9 years later I learned Open Source Web languages HTML, CSS and Javascript in a Coursera MOOC.

What is your current job position or role?
I work for myself, have 3 customers only.

How did you get into mobile apps?
With Coursera: “Full Stack Web Developer”. Apps with Ionic and AngularJS.

Why did you choose Ionic?
It was proposed by the prof and it was free.

Why did you join the Ionic Academy?
I met an interesting guy who hadn’t gotten the promised Apps from his Web Developers for 2 years. He figured a 70 years old guy who had started to learn something new was a good partner for the future. When we discussed all the features he wanted, I knew I had to learn Ionic seriously which brought me to the Ionic Academy.

Which feature of the Ionic Academy do you like especially?
The fact that the videos are supported by a working code. I had lost lots of time because of typing errors before. Also, some features didn’t work es promised because of differences in versions.

What apps did you build with Ionic?
An app for the 200+ drivers of a limousine rental company “Taxoil”(iOS, Android) and another one for an animal protection society “Tierschutz XL” (iOS, Android). Both are in German language and available in App Store and Play Store under those names.

What were the biggest challenges with that app?
The biggest problem was that the customer wanted lots of “you should” and “you shouldn’t” and very few interactive features. Only when the App Store declined that version of the app, the customer became inventive and found lots of use cases for interactive features. At the end, he was very proud – and justly so – of “his” app.

How did the Ionic Academy help you?
There were lots of uncertainties about some Cordova plugins for many months. Especially with the Camera API and its different appearances whether you wanted to store the pictures or you wanted to show them. Also, the “NS*****” descriptions in iOS info.plist caused me days of utter despair. The tips you got on the Cordova page rarely met Apple’s specifications. So, either you travelled through hundreds of posts on Ionic Forum or Stack Overflow or you posted a question on the Academy Forum and got the correct answer.

Do you plan to develop more apps in the future?
I tried to get some new customers in Switzerland on the guess that Web Designers don’t do apps. They do! Why? Because of Ionic! As I’m retired, I can learn what I want, and that’s now AI and Machine Learning. It would sure be nice to develop one more app but … who knows!

Fritz picked up Ionic and can now accept new projects for mobile apps, based on his web development skills.

If you want to follow the same path and quickly learn Ionic, you can become a member of the Ionic Academy today and get your first paying (and happy) customers in no time.